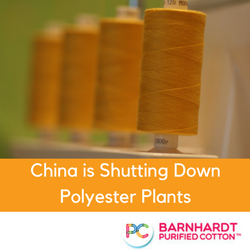 As part of an unprecedented crackdown on pollution from its manufacturing sector, the Chinese government has shut down nearly 40 percent of its manufacturing facilities nationwide, with a heavy impact on the textiles industry.

The pollution reduction program, initiated in 2016, has applied fines and criminal charges, as well as shutdown orders, to more than 80,000 factories across 30 provinces on the Chinese mainland. Entire towns and regions have seen their factories hobbled, as inspectors turn off fuel and electricity supplies during inspections.

Regulators have come down especially hard on printing and dyeing facilities, which intersect with the production of polyester and other fabrics. The textile scouring, bleaching, dyeing and finishing processes use lots of heated water. The government is now requiring that clean, gas-fired boilers be used to heat the water.

As factories have weathered shutdowns, fines, and market reactions to the regulations, the impact on global supply chain has been felt in both near and faraway places. The prices of dyes have surged in the last couple of years, crippling margins in the sector. Shutdowns have caused pain for global distributors, who have failed to receive product on-time, leaving them with low to no inventory weeks and months at a time.

Many supply chains have simply uprooted their manufacturing regimes, taking their textile businesses to other low-cost, less-regulated markets in Asia.

Over the longer term, the environmental rectification program should yield multiple benefits. Factory employees will enjoy cleaner working conditions, leading to better health, less time missed, and greater productivity. Factories will run more efficiently as well, with the necessary environmental retrofits serving as upgrades in outdated facilities. The newly-reoriented facilities, when considered along the entire supply chain, will now adjust for the capacity requirements of user demands, as annual growth in polyester is expected to maintain at near eight percent.

In addition, Chinese polyester may make an even greater comeback in the global markets, especially here in the United States, as retailers who demand certain standards of environmental friendliness from their manufacturers, revisit the Chinese factories that have met regulatory demands for a greener future. Large US retailers like Walmart, Costco, and Target all have environmental goals for their global supply chain, and regulatory compliance will see a vanguard of newly-retrofitted facilities competing for market share in textile production.