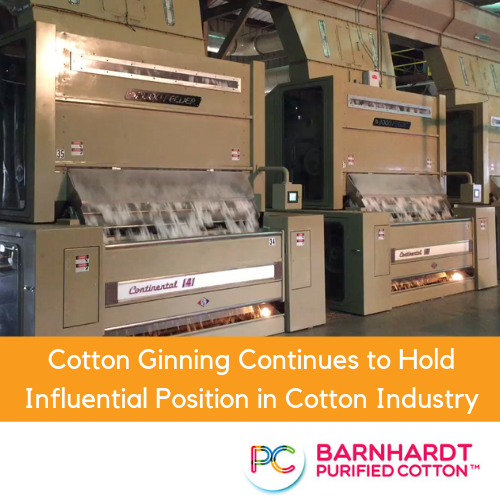 The history of cotton ginning is a fascinating one. While many of us learn in history classes about inventor Eli Whitney’s breakthrough design for the modern cotton gin, most of us may not know that the cotton industry is writing new chapters in the story of ginning, even today.

Early History of the Cotton Gin

Prior to Whitney’s invention–in the pantheon of human innovation, along with the light bulb, the telephone, and the internet–cotton pickers separated seeds from only long-staple cotton using hand-cranked gins. Whitney’s mechanical masterpiece enabled growers all across the American South to not only gin long-staple cotton, prevalent in coastal areas but also the short-staple varieties that farmers could grow almost anywhere in the region.

In their earliest iterations of the antebellum South, gins were part of a plantation’s infrastructure. After the war, however, plantations grew in size and began to focus solely on growing the plant, while gins became public, family-owned businesses where farmers congregated and socialized. That family business ethos drives many gins across the South today, as many have passed from generation to generation much like their counterparts in farming.

While ginning operations remained largely the same between the Civil War and World War II, the modern era has seen more rapid evolution of this key component of the cotton supply chain from field to manufacturers. Currently, advancements in ginning are being driven by the American industry’s focus on quality, the sustainability demands placed on cotton by a variety of stakeholders, as well as the race to implement blockchain technology.

The cotton industry is at the forefront of quality sustainability initiatives in global agriculture. These two focus areas–quality and sustainability–often go hand-in-hand when supply chain participants are developing processes. One of the key foundations of both quality and sustainability analysis of certain products, such as life cycle assessment, pertains to the concept of traceability. With this concept, growers and manufacturers focused on quality, as well as governing bodies and NGOs focused on improvements in environmental impact will trace a product from cradle–the growth or production of raw materials–to grave–the disposal or the biodegrading of a product subsequent to use.

Traceability promotes better classing, to drive a fairer marketplace for selling all the varieties of cotton that emerge from the field, as well as a way to break down where quality and sustainability goals fall short in the production process.

Upon arrival at the gin, workers log each module identification into a database. After ginning, workers label each bale with a permanent bale identification tag. A sample taken from each side of the bale is collected and identified with the same number. Samples are sent to one of ten USDA classing offices. Thus, gins come into play at a crucial pivot point that stands between the fields where cotton is grown and the markets where it’s sold.

Blockchain, first developed to manage the trade of the cryptocurrency bitcoin, has become a game-changer across many industries looking to utilize technology for a public ledger of transactions. Just in the last three years, participants in the cotton markets have sought to converge concepts like traceability with the actual trading of cotton to a unified technology platform. Since virtually the beginnings of modern cotton markets, such as the commodities markets in Chicago, the buying and selling of cotton and other commodities have been slow relative to the lightning speed of other types of trade transactions. This lack of pace has been due to the paper-intensive process of the crop and how its quality is determined, as well as the credit paperwork, like letters of credit, that sellers must accept from buyers and buyers must use in a way that hampers working capital.

Now, with the convergence of multiple technologies aligning to a blockchain environment, gins will again play a central role in speeding the markets, as their already high-tech enterprises will control much of the product-oriented data.

The cotton gin, since its modern rebirth in 1794, has, like any good innovation, found ways to reinvent itself and expand its influence. From the late 1800s to World War II, cotton gins focused on doing the job at hand, removing seeds. Since the 1950s, gins have paved the way for other innovations in quality and sustainability. Now, as we approach the year 2020, gins stand central to the blockchain adoption that will surely revolutionize cotton commerce. While much work is yet to be done, that reality will be here before we know it.