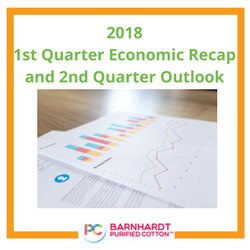 As cotton gins across America finish  ginning the last of the 2017 crop, they have ginned almost 19.5 million bales compared to 16 million at this point last year.  Without exception, each of the 10 classing offices across the country have classed more cotton than a year ago. Even with the impact of Hurricane Harvey, the Corpus Christi classing office – which would have been the most impacted by the hurricane – has classed one million more bales than the prior year.  Despite the ravages of Harvey, the 2017 crop is still expected to top out at 21 million bales.

Demand for cotton continues to grow globally.  This dynamic is due to conversion of tastes by consumers on a global scale, away from acid-based, crude oil polyester products toward pollutant-free fibers such as cotton.  In addition to the consumer-driven preference for cotton due to comfort, China has cracked down on polyester production facilities because of the air and water pollution they cause.

The increased demand and forecast for lower global reserves have led to higher cotton prices here in the US.  In March, we have seen the cotton futures approach 85 cents per pound.. Additionally, the basis merchants charge has been significantly higher for the 2017/18 crop.  Analysts have attributed this increase to higher freight costs and tighter supply.

USDA projections for 2018 planting intentions are due for release on  March 29th. There is speculation that there will be a three percent a increase in acres planted in the US this year.  However, as a cautionary note, the 2017 yield per acre was a record of almost 900 pounds per acre. Historically, the yield has been more on the order of 825 pounds per acre.

Given this scenario, we don’t expect cotton prices will fall below the $.78 – .85/lb. range for the foreseeable future.