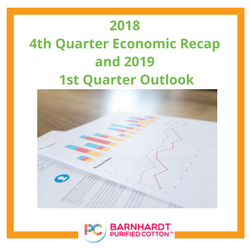 As the 2018 cotton crop comes to a close, the overriding theme continues to be the trade showdown with China.  On any given day, one might hear that trade talks are moving forward, and the very next day we hear that the trade talks are stalled or are even closed.  The only thing that’s clear is that Sino-American trade talks are volatile, and both the US and China are trying to better their perceived position.

As long as volatility is the theme, prices should remain moderate.  Furthering uncertainty has been the lack of a supply/demand report during the US government shutdown.  This uncertainty frustrates growers, who are in the process of determining their 2019 planting intentions.

As of this writing, the government is now open again for at least 3 weeks, as Congress and the President debate funding for the border security to the south.  As the agencies that provide data for all crops resume their reporting, we will likely see some movement up or down depending on the extent of the export numbers.  It’s widely known that India’s crop was below expectations for 2018; thus, they have been buying cotton from the US. The amount exported or purchased should be reported the week of January 28th.

An important factor with regard to prices going forward is the weather.  As of the end of January, the US drought monitor doesn’t show any growing regions as being too dry.  Cotton Grower magazine has surveyed growers around the country and found that there will be a .36 million acreage reduction in cotton planted in 2019, with Texas and Georgia collectively with .8 million reduced acres. To the contrary, the Mid-South region will see more acres planted.

The remaining level of cotton reserves in China may be another important factor that can potentially impact global cotton prices. Over the last three years, China has drawn down their reserve stocks through government auction to fill the gap between their own crop and the demand to support Chinese mills.  As their reserves have diminished over this time frame, there is broad speculation that China will again be a large global importer of cotton.

We have noted many potential variables that could impact current US cotton prices that have been in the mid .70s since mid-December.  Like many other commodities, one could make the case for higher cotton prices while others believe prices may erode further. Our next update will provide a closer view of planting intentions in the American market, as well as global trade updates including export data.