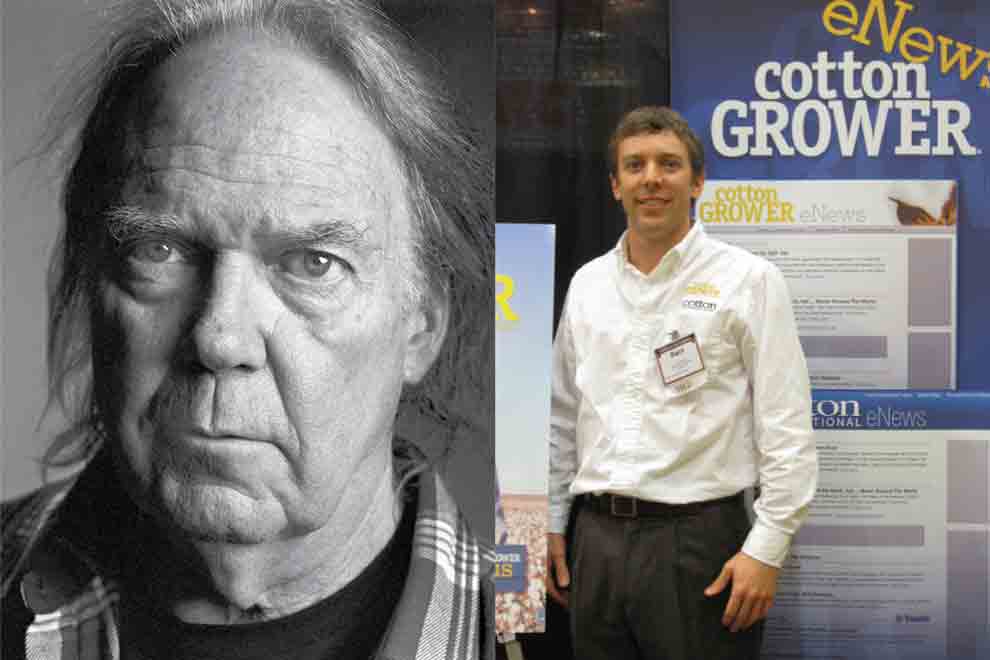 Neil Young is back in the news again. The aging rocker has bid a fond farewell to Starbucks over the coffee titan’s support for a lawsuit against labeling food products that contain GMOs in Vermont. The key plaintiff in the case is the Grocery Manufacturers Association, whose membership includes both Starbucks and Monsanto. While acknowledging that Monsanto probably doesn’t care what people think, he’s probably right that Starbuckswould if caffeine fiends decided to take a stand by abstaining from their lattes. While Young’s social and environmentally conscious stances come across as defiant and good-natured, the problem is sometimes he doesn’t seem to have all of his facts straight—especially when it came to cotton recently.

While a GMO lawsuit isn’t our area of expertise, cotton certainly is. So when the co-founder of Farm Aid decided to speak out against the growing of non-organic cotton this past summer, it got our attention immediately. Cotton Inc. jumped into the fray, disputing Young’s claim that cotton accounts for 25% of global pesticide use, claiming that it was, in fact, only, 5.7%. That’s a significant difference. And when you’re a rock n’ roll hero, people take you for your word, so we wish Young had checked facts like these first—or at least acknowledged his exaggeration after the fact ·(or, in this case, after his erroneous fact).

Beck Barnes of Cotton Grower magazine also spoke up after Young’s latest cotton claims. As a fan of the performer it was obvious she was disappointed. While she also took offense at the 25% claim, she also didn’t care of how Rolling Stone’s Miriam Coleman positioned Young’s belief on cotton’s overall percentage of cropland:

“To be sure, Coleman is implying here that cotton being planted on five percent of arable farmland is bad because… arable farmland is supposed to be for other types of crops? I don’t know what she means, to be honest. But the implication is that this is somehow bad or scary or something.”

If you haven’t read Barnes’ “Open Letter to Neil Young,” you should. Aside from questioning some of Young’s claims, she also invites him to meet her out on American farmlands so he can meet farmers to come to a genuine understanding of the challenges they’re facing.

To Understand the Future, You Have to Look to the Past Two Decades

Since cotton is our business, it’s not going to be a secret that we side with Barnes. We also have partnerships with farmers, and we understand how they’re often under fire for practices, whether they’re growing cotton or food. But farmers are more innovative than they’re given credit for. They’re not just doing the same ol’, same ol’. Over the last 20 years they’ve instituted practices that have reduced energy use, lowered farming emissions, decreased soil loss, and dropped water usage. So pairing them as villains isn’t fair. They face great challenges to feed and clothe a population that continues to climb. So quintupling global pesticide use for cotton growing does them a disservice, especially since they’re constantly working to create and utilize sustainable farming methods that allow them to keep up with growing demand.

Keep on Rockin’ in the Free World, Just Do So Accurately

In closing, we harbor no ill will toward Neil Young. We know his heart’s in the right place, and we’d never want him to stop being an advocate for what he believes in. Honestly, that’s what makes him who he is. In fairness, some of the laundry techniques in his article make a lot of sense when it comes to water conservation. But we’d still ask that he take the time to research some of his stances in more detail, and consult the experts in the field before planting seeds in the heads of his fans. Hard-working manufacturers and farmers deserve that courtesy.