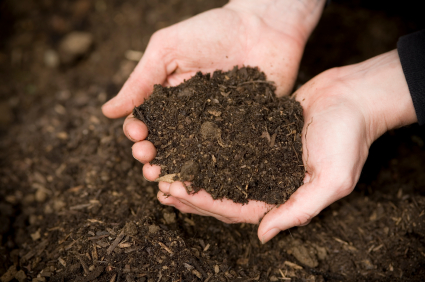 One question we often get about some of our products is regarding cotton compostability. In an effort to shed a light—albeit a somewhat technical one—on cotton’s biodegradability, we wanted to share the results of a test that was conducted in 2010.

The method requires that a standard compost mixture be prepared that has a set amount of nitrogen, carbon, and oxygen. Moisture content and temperature is closely monitored to ensure proper microbial activity. Three-cotton wipe fabric samples were then randomly placed in the compost vessel, and left there for two weeks. Again, the compost temperature was measured daily. If the compost temperature decreased, compostable materials with the proper carbon to nitrogen ratios were added and then aerated.

After two weeks in the compost, the samples were removed, cleaned, dried, weighed, and photographed. The amount of weight lost (based on the beginning fabric weight) is calculated as a percentage. The samples were photographed and then placed back in the compost for another two week testing period, as described above. After that, the process resumed: they were once again removed, cleaned, dried, and weighed—and the percentage weight loss was also calculated again.

ASTM Method D 6400 states that weight loss of 90% or higher constitutes complete biodegradability by aerobic composting. The wet cotton nonwoven wipes were 40% degraded after two weeks and 95% degraded after four weeks in the compost mixture/vessel. Therefore, this cotton nonwoven wipe fabric is completely biodegradable per the ASTM D 6400 definition.

On the flipside, data from other studies has shown that for nonwoven fabrics produced with polyester and polypropylene fibers, the primary fibers used in many of these nonwoven fabrics are not biodegradable by aerobic composting. In fact, they lose little to no weight when tested via this method.

In the end, when it comes to cotton nonwoven wipes, we feel confident in saying that they passed this biodegradability test with flying colors. To learn more, visit our Technology page or our extensive Cotton Library.