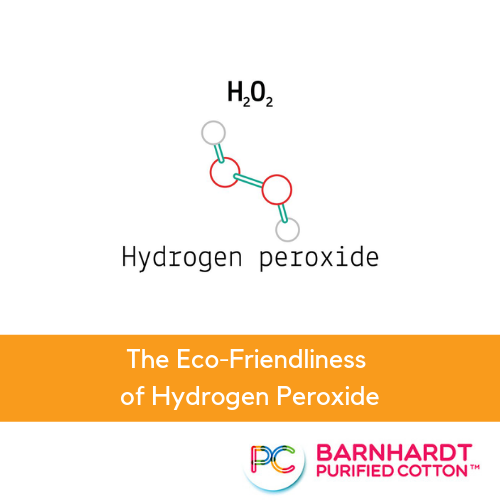 People expect their cotton to be white. In fact, they want it very white, especially when it’s used in medical and nonwoven hygiene products. You may already be picturing a cotton ball, a baby wipe, or cotton rounds used for removing makeup.

Many of us don’t realize that cotton isn’t ultra-white in the field. In fact, it’s quite dirty, and there are many grades of color available. But even the whiter variations aren’t white enough to pass consumer scrutiny. So what are manufacturers to do when they want to reach a standard for whitened cotton?

In the history of cotton processing, many companies have used a form of “bleaching” to achieve whiteness, utilizing some form of chlorinated agents that are hard on the environment but achieve their goals for fiber color. The practice was so ubiquitous that the common industry term for whitening is still “bleaching,” even though most no longer use chlorine or related products in our processing.

While we certainly can’t speak for our competitors, Barnhardt long ago realized the necessity of advancing our process for cleaning and whitening cotton, known as purification. Purification is, at a high level, a two-fold process of mechanically cleaning and then washing cotton fiber.

In an effort to be more sustainable and healthier in our processes, we replaced all chlorinated products used in purification. While bleach certainly did its job well with regard to whitening cotton, we found a better way: hydrogen peroxide.

From a biodegradability standpoint, hydrogen peroxide is very desirable, since it breaks down into water and oxygen molecules. Not only does it biodegrade, but it does so quickly. After hydrogen peroxide does its cleaning, whether it’s removing bacteria, mold, dirt, or debris from a substrate, it begins breaking back down to its original building blocks.

Is Bleach Bad for the Environment?

Chlorine bleach, used in lots of different types of manufacturing, including the whitening of fibers and wood pulp, poses a significant risk to our natural world from several angles. For example, when manufacturers release chlorine and liquid wastewater, chlorine is highly reactive with minerals and other elements to form dangerous toxins like dioxin, furam, and persistent organic pollutants that stay in water and soil for years.

Hydrogen peroxide has virtually none of the environmental and health concern of chlorine bleaches. While hydrogen peroxide at particularly high concentrations approaching 35 percent can pose some health risks to those who don’t take proper handling precautions in industrial settings, there are none of the short-term or long-term disadvantages and outright threats to the environment posed by the use of many types of chlorine bleaches.

This is the main reason companies Barnhardt replaced chlorinated agents with oxidizing agents like hydrogen peroxide for their industrial cleaning and whitening requirements over 25 years ago. The difference for most applications, such as cotton fiber purification, is that hydrogen peroxide is gentle, easier to handle safely, even in highly-concentrated formulations, and best of all, it still does a great job in cleaning and whitening. The proof is in the highest quality purified cotton on the market today.

How does hydrogen peroxide disinfect?

There are many uses for hydrogen peroxide as a cleaning agent, and one of its most sought-after benefits is the fact that it kills and prohibits the growth of many types of bacteria. Thus, in some of its stronger forms, use of hydrogen peroxide does result in a sterilized substrate.

This last attribute is just one of the chief reasons why manufacturing firms are turning to hydrogen peroxide, as for most medical and personal applications, the compound provides a more than adequate level of sterilization, eliminating the need for typical gamma irradiation methods to achieve the same goal.

The use of hydrogen peroxide as a surfactant for cleaning and whitening, as well as providing more than adequate levels of sterilization, has been a success for Barnhardt and many other companies across many industries. For us, it’s the next step in an ongoing effort to make our products and processes healthier to humans, plants, and animals, as well as friendlier to our natural world.