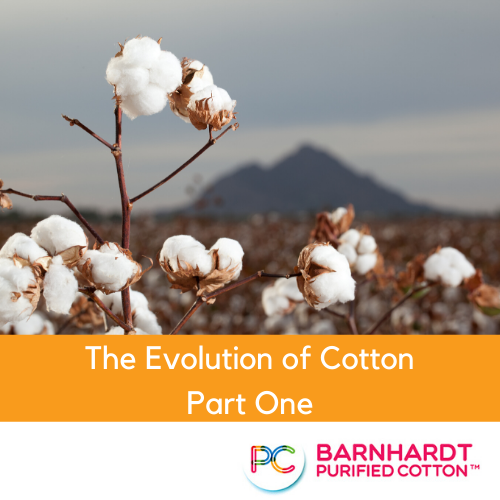 Cotton–there’s nothing quite like it. It’s soft, absorbent, and strong, and it gets stronger in conditions where other fibers wilt from the elements. While other fibers may be important, in the way that silk connotes luxury, or hemp brings to mind toughness, no other fiber, natural or man-made is as interwoven with the human consciousness and condition as cotton.

Cotton is more than a fiber, foundational for a host of fabric applications ranging from clothing and upholstery to bedding, towels, and even nonwovens like wipes and hygiene products. It’s been with us so long, holding such prominence in our lives that cotton is a de facto benchmark–an ideal–by which all fibers and fabrics are judged.

In this series, we’ll journey through the evolution of cotton–from ancient times to its current state–as well as the leaps and bounds of progress made in cotton processing, which, in turn, has led to an explosion of new cotton-based products in the modern era.  Finally, we’ll look at the properties of cotton that make it so valuable and versatile in the marketplace.

Cotton is seemingly as old as humankind itself, with discoveries dated well before the Common Era. In fact, scientists have found cotton ball and cotton cloth remnants dating back 7000 years. Cotton was also known to be grown, spun, and woven into cloth in Pakistan’s Indus River Valley some 3,000 years ago. During the age of the explorers, cotton crisscrossed the globe along with other coveted luxuries. Cotton arrived in Europe courtesy of Arab merchants around 800. When Christopher Columbus famously ventured among the Caribbean Islands in 1492, he saw cotton growing in what is now the Bahamas.

Perhaps cotton is such a part of our psyche due to its exceptional place in world history, in that it was already present in all of the major continental regions at the start of human civilization.  Perhaps cotton is etched into a prominent place in the human story because unlike many other agricultural assets, cotton has played a major role in the history of places like India, the British Empire, and of course, the United States. Entire economies have been transformed by cotton production and trade, and wars have been fought over means of its production through slave and indentured labor. For many, cotton has been a life-and-death matter.

Cotton has been with us so long, people have subconsciously adopted it as the standard for how all fibers and fabrics look, feel, and perform. It’s a reference point with immediate connotations for the listener. When we hear something feels “cottony” or “cotton-like,” we expect that same softness that’s so natural to the touch. We also expect a firmness or toughness, even with super-soft, high thread count fabrics like cotton bed sheets.

The same is true when we hear that something isn’t “cottony.” We anticipate a difference–a fabric might be smoother, like silk, or rougher hewn like hemp. Or it feels unnatural, such as a technical fabric like polyester, Kevlar®, or spandex.

From a branding perspective, cotton’s thousands of years on the market have rendered it both ubiquitous and forever tied to our imaginations as something distinctly good. We love it in all kinds of fabrics and uses, and without reservation, we bring cotton as close to our bodies as possible, in many permutations like clothing, medical supplies, and hygiene products.

While many products benefited from global exchange, cotton was noted by Columbus to be the fabric of choice of the native people of the West Indies.  Instead of becoming an agricultural phenomenon like other “new” products, cotton simply endured major shifts in its cultivation and exchange globally.  While India has produced cotton continuously throughout the age of historical record, other centers of growth and manufacturing came online in subsequent years. Central-Eastern China, Egypt, North Africa, Spain and Portugal, and the southern United States are truly notable for their dominance in the cotton industry.

Cotton had early and important roles to play on virtually every continent prior to the year 1500. Now, more than 500 years later, cotton’s role in improving the human condition (“the fabric of our lives”) has only grown in stature. Use of cotton has proliferated through the Industrial Revolution, the technology era, and the explosion of needs for strong, soft, absorbent fabric.

Notable influences on the rise of cotton are the invention of the cotton gin by American Eli Whitney in 1793. This simple device pulled the seeds from the cotton fiber, a previously arduous, time-consuming task for growers. So disruptive was the cotton gin, which did the work previously accomplished by the hands of 10 people, it effectively sparked the creation of the modern textile industry.  The gin made it possible to supply large quantities of cotton fiber to the fast-growing textile industry. Within 10 years, the value of the U.S. cotton crop rose from $150,000 to more than $8 million.  Almost overnight, the cotton gin ripped up the economic blueprint of the United States and subsequently made them less united.  The American South, propelled by the soaring value of its number one crop produced by slave labor, became an economic and political powerhouse.

In the technology era, advancements like nonwoven techniques for binding cotton fiber, along with purification techniques for whitening, have created an explosion in medical and hygiene uses for cotton.

Cotton fiber’s use in apparel peaked just after World War II, when over 80 percent of apparel was comprised of cotton. With the advent of manmade fibers since the 1940s, that figure has dropped below 40 percent; however, cotton remains the runaway leader for naturally-sourced apparel fabrics.

In our next installment, we’ll take a look at how cotton has not only maintained its staying power in modern times, but continues to expand its influence in making our lives better, offering a clear choice of a natural, more sustainable fiber that’s taking manufacturers and consumers alike “back to the future.”