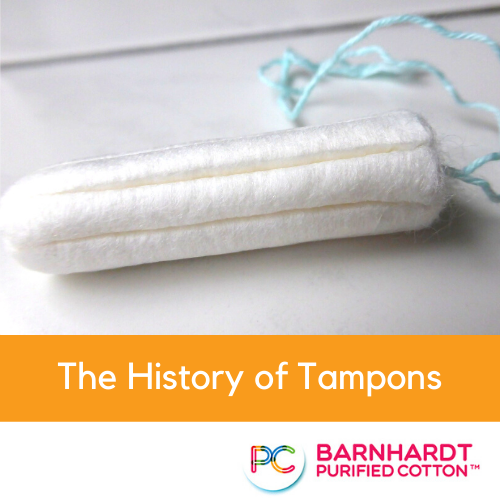 For ages, women have preferred tampons over other menstrual products because of their ease, convenience, and comfort. In fact, the average woman uses as many as 16,800 tampons over the course of her lifetime. Yet few people know the history of this important product; let’s take a closer look.

Who Invented the Tampon?

While Dr. Earle Haas patented the first modern tampon in 1931, tampons had been used for thousands of years prior to that by women across the globe. The Papyrus Ebers, the world’s oldest printed medical document, describes the use of papyrus tampons by Egyptian women as early as the 15th century BCE.

Papyrus wasn’t the only material used in early tampons – women got seriously creative. Hawaiian women used the furry part of the native hapu’u fern, while women in ancient Japan fashioned tampons out of paper and used bandages to hold them in place. Women in Equatorial Africa used rolls of grass.

Much later, Dr. Haas invented the tampon we’re familiar with today by experimenting with cotton fibers and cords for easy removal. He also came up with the idea for the paperboard applicator, which has since been largely replaced by plastic. Gertrude Tendich later bought the patent and trademark rights and sold the first Tampax product in 1936.

The tampons of today are a far cry from those that women cleverly fashioned in ancient times. Actually, they’re a far cry even from those that Gertrude Tendich first sold in the 1930s. In 2020, tampons are more absorbent, more versatile, and smaller than ever. They are designed to be seamless, so comfortable that a woman can completely forget she’s wearing one.

The vast majority of tampons in the market today contain only a small percentage of cotton blended with rayon (viscose) which is a less expensive, manmade fiber. Unfortunately, there’s still a great deal of anxiety about tampons spurred by misconceptions in the media. Tampon manufacturers are held to extremely rigorous standards these days, which means tampons are highly safe for the end-user.

But in today’s market, women want both transparency and choice when it comes to their hygiene needs. With the advent of new 100 percent cotton (conventional and organic) tampons now readily available online and on store shelves, manufacturers are beginning to provide the ingredient transparency and choice that women seek.  For example, both just. a period (made from 100 percent purified conventional cotton) and Tampax PURE (also made from 100 percent purified organic cotton) tampons provide women full ingredient transparency as well as the opportunity to choose a natural, safe, purified cotton tampon for their most intimate hygiene needs.

Until recently, regulatory bodies haven’t required ingredient transparency from manufacturers of feminine hygiene products, but even that dynamic is changing to reflect consumer demand. Pressure from consumers looking to make more informed decisions about healthy choices for themselves and the environment is starting to translate into legislation. In fact, New York is the first state to pass full ingredient listing for tampons, pads, and other feminine hygiene products. Manufacturers have 18 months to update their packaging to disclose all of the ingredients. Additionally, many brands are placing such information on-line for consumers to read and become more informed about the product’s makeup, as well as the sourcing of materials.

Barnhardt has played a key supply chain role for the tampon industry for more than 40 years, supplying Purified CottonⓇ to manufacturers worldwide. We are committed to the highest standards of consumer safety, producing cotton in a  totally chlorine-free purification process to provide the purest, cleanest, safest fiber for all hygiene products, including tampons.  Visit https://www.barnhardtcotton.net/ to learn more.