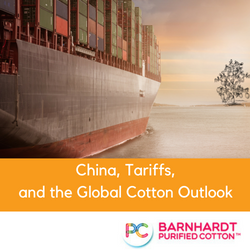 How Will Tariffs Affect Cotton Worldwide?

Devine correctly notes that any discussion of the global cotton market, with regard to supply and demand, must start with China. China annually consumes 15 million more bales than the country’s cotton farmers produce, and while the government has bought extensive reserves in past years to make good on guaranteed price promises for Chinese farmers, demand for high-quality product for certain applications, such as American cotton, remains high.

From 2011 to 2015, the Chinese government pursued what became an unsustainable policy of stockpiling reserves. During the last three years, the country has been selling off its reserves, reviving a greater need to import cotton from other countries, especially the US. Now, the government will find itself forced to bring in US cotton. As Devine illustrates, the US influence on the market in terms of supply, means that American cotton exports are equaled when you combine the exports of the next six largest exporters, India, Brazil, Australia, Burkina Faso, Mali, and Greece.

The US government’s use of tariffs as a reset on global trade relations has left the Chinese with some big decisions to make. As the Trump administration has slapped 25 percent tariffs on multiple classes of Chinese goods, the Xi government has responded with similar tariffs on US cotton, among other products. In further response to American actions, the Chinese will likely increase cotton production in 2019.

There are two likely scenarios playing out in the Chinese market. If they increase cotton production in 2019, this will negatively impact their food crops. This will be a difficult decision for the China government as it would risk insufficient food for an ever-increasing population.

In a more realistic scenario, China will continue to buy large amounts of US cotton to fill the gaps of its own supply. It could be speculated that this is what the Trump administration is betting on to help reduce the huge trade deficit that has been in place for many years between the US and China.  Due to a wide range of import classes, the Chinese will be able to buy US cotton without higher duties. These classes include the use of free trade zones, as well as importing for use in products that will later be exported.

One of the better points that Devine offers, which should serve as a predictor of the US getting the reset it wants in its trade relationship with China, is that American cotton achieved some of its highest export years on record during recent years when the Chinese bought dramatically fewer bales. American cotton is dominant for two major reasons. First, scientific innovation in genetic modification has enabled American growers to double their yields per acre farmed. Secondly the US equipment industry continues to innovate and reduce labor cost in the harvesting of cotton.

If the US maintains its dominance as the supplier to the global cotton market outside of China, resetting its trade balance with the world’s largest importer of cotton will benefit American farmers for the next few years.