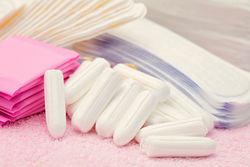 In this two-part post, we’re going to focus solely on tampons. Part I will tackle the history of this critical feminine care product, while Part II will dispel popular myths.

An innovation borne from early improvisation

Forms of tampons have been around for many years. Ancient Egyptians crafted a disposable version from softened papyrus. In the fifth century B.C., the Greek physician Hippocrates described a tampon made of lint wrapped around lightweight wood. Around the world women improvised from the materials at hand: in Rome, they used wool; in Japan, paper; in Indonesia, vegetable fibers; and in Equatorial Africa, rolls of grass.

Fast-forward to 1929 for a match made in cotton

In 1929 Dr. Earle Cleveland Haas attempted to invent a product that would absorb menstrual flow, and cotton was at the center of his game plan. He started with a strip of compressed cotton fibers about two inches wide and five to six inches long. The entire length of the pad featured a sewed cord to bind the fibers together, and an extra cord extended out so the tampon could be more easily removed.

He invented a device to compress the fibers into a small highly absorbent cylinder. Then, in order for women to insert it without touching the cylinder, he invented the paperboard applicator. He filed for his first patent on November 19, 1931, and the description was for a “catamenial device,” which came from the Greek word for monthly. After buying the patent and trademark rights, Gertrude Tendich founded the Tampax company. Obviously the primary goal of the company was to mass-produce tampons. In 1936, they sold the first one with an applicator.

Behind the numbers of today’s tampons

Since the good doctor’s modern-day invention, cotton has been used in tampons. Today tampons are used by up to 70% of menstruating women in the US. In fact, it is estimated that the average woman will use as many as 16,800 tampons over her lifetime. In 1980, the FDA classified tampons as a class II medical device. Class II devices require “special controls” which are more than the “general controls” which are sufficient for class I devices. Tampons are labeled in absorbency terms based on the weight of menses uptake:

Most name-brand tampons are made with a blend of cotton and rayon or 100% rayon. There are also small niche companies that sell tampons made of 100% cotton. Barnhardt’s quality bleached cotton fiber is produced using our chlorine-free bleaching process and is used to produce tampons around the globe.

This article references Tampax’s authoritative “History of Tampons and Tampax” page, as well as this Harvard Law School paper. For even more detail on the history and regulation of tampons, click through.